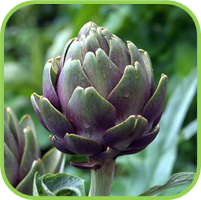 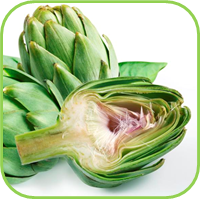 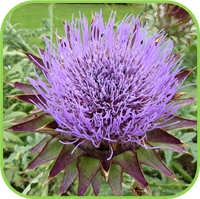 Besides being delicious to eat, this plant makes a handsome addition to the herbaceous border, with its silver grey thistle like leaves. The flower heads are the edible vegetable. Once it has finished flowering.

Growth Characteristics:
•Perennial, Evergreen, Frost tolerant,
•An architectural plant, suited to the back of a large border or as a feature in the garden.

Companion Planting:
•Attracting Beneficial insects: If the flowers are allowed to open, they become inedible, but bees love the magnificent peacock-blue thistle flowerheads.

•Unopened flower heads are boiled and the fleshy bases are eaten hot, with hollandaise sauce or melted butter, or cold, with vinaigrette,
•The hearts are baked, fried, or marinated,
•Baby artichokes (from side shoots) are eaten whole, pickled, or preserved in oil,
•Young leafstalks, known as artichoke chard, are blanched and eaten as a vegetable.

Artichoke leaves may be beneficial in the following cases:

Lymphatic System
•One of the active ingredients (Dicaffeoylquinic acids) exhibited activity against HIV integrase in vitro and prevent HIV replication in tissue culture.

Cardiovascular System
•Reduces blood platelet aggregation, thus suggesting a possible action in the prevention of heart disease.
•Can also lower high blood pressure,
•Lowers hyperlipidaemia; prevention and treatment of atherosclerosis and arteriosclerosis Liver
•Cholagogue: an agent that produces and increase the production of bile by the liver.
•Choleretic: Increases the flow of bile from the liver, Artichoke increases the solid bile salts as well as the liquid phase.
•Cholekinetic: The ability to increase the contractive power of the bile duct.
•Hepatoprotective: Protects liver from poisonous effects in a manner similar to silymarin from milk thistle by increasing the glutathione levels.
•Hepatotonic: Able to stimulate the regeneration of liver cells in much the same manner as does silymarin. Useful for preventing blood and liver cholesterol elevation in the presence of toxins such as alcohol, and prevention of liver damage due to air-, water- and food-borne toxins.
•Unlike other chalogogues, it may be used in cases of gallstones because it lowers cholesterol.
•Treatment results in the elimination of many common complaints: epigastric discomfort, biliary tract dysfunction, dyspepsia, pain, nausea, retching etc.

Urinary System
•Diuretic in conjunction with an increase in urea and other nitrogen containing substances,
•Ascites (Accumulation of fluid in the abdominal cavity).

Musculo / Skeletal System
•Arthritis – diuretic in conjunction with an increase in urea and other nitrogen containing substances,
•Anti-inflammatory.

SAFETY DATA:
• Recognized as safe by the FDA. It has no known toxicology. As with all cholagogues, persons with acute gallstones should exercise extreme care in using such agents.
• No adverse effects expected when used during pregnancy and lactation.